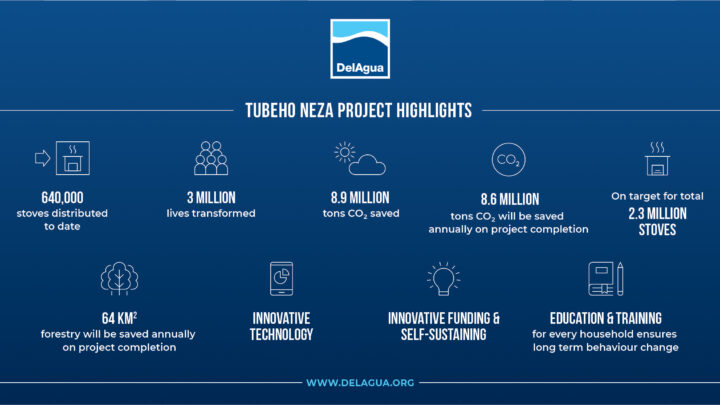 DelAgua has been working in partnership with the Government of Rwanda since 2012 distributing innovative, high quality, high performance cookstoves to rural communities. The project is operating at scale and for the long term: over 640,000 stoves have been provided helping more than 3 million people, making it the largest stove project of its kind in the world. The stoves’ contribution towards Net Zero carbon emissions to date is 8.9 million tons and each stove over its 7- year life saves at least 22 tons of CO2 emissions. Our goal is to provide 2.3 million stoves across the whole of rural Rwanda.

Both the funding and the project infrastructure are key innnovations that enable our project to be one of the few stoves programmes today that is viable and scaleable: The project is uniquely self- sustaining because it is funded by the sale of carbon credits generated by the stoves. The credits are purchased by corporates such as airlines to fulfil their Net Zero commitments and by individuals to offset their carbon footprint and these sales ensure we can invest in more stoves to benefit more families and the environment. A network of 4,000 trained community workers and bespoke smartphone technology provide the highly efficient infrastructure that powers the programme.

The provision of these stoves is a particularly impactful example of a Nature-based Solution in action.

In the race to combat climate change we know that the challenges of nature loss and global warming are inextricably linked and the WWF reports that there are approximately one billion highly vulnerable people facing high risks to their safety and welfare from the adverse impacts of climate change. The people at greatest risk are low-income communities dependent on local natural resource systems. These are exactly the type of communities DelAgua works with in rural Rwanda.

The IUCN defines Nature-based Solutions as actions taken to protect, sustainably manage, and restore ecosystems and that also address major societal challenges effectively, challenges that include climate change but also food and water security, human health, disaster risk and socio-economic development. Our stoves are known for addressing these societal challenges through their significant positive impact on climate change, the health and wellbeing of the recipient families and improving their education, economic situation and reducing gender inequality but the stoves also have an equally important impact on local ecosystems.

Our Tubeho Neza (“Live well”) project operates in rural Rwanda, one of the world’s least developed countries and where the average daily income is $1.90 per day. These rural communities are dependent on their local natural resources to survive. Prior to the distribution of our stoves, the population cooked on traditional 3 stone fires which require large amounts of wood. This has led to significant deforestation, severely damaging local ecosystems and contributing to climate change both through the carbon emissions produced by the open fires and by the reduction in forestry which means reduction in carbon storage. Flooding and landslides are also a major hazard.

Rwanda, known as the “Land of a Thousand Hills” is small, hilly, and densely populated so deforestation and heavy rainfall is a destructive combination. Landslides occur where heavy or sustained rain falls on the steep, clay slopes, in particular those that have been destabilised through deforestation. Cutting down trees to supply firewood to a growing population is a major cause of this.

The DelAgua stove burns cleanly and efficiently using at least 50% less wood than the open fires, it also requires just small twigs and tinder, not large branches. Put simply, the DelAgua stove keeps trees in the ground. When a local community receives the stove the immediate positive impact on the surrounding forestry is dramatic and for the long term as cooking habits are changed for good. Maintaining the forestry also reduces mudslides, saves roads and homes and builds Rwanda’s resilience to climate change and adverse weather events.

To understand exactly how the DelAgua stove is delivering a Nature-based Solution to benefit the people and nature of Rwanda, Nyungwe forest provides a powerful case study:

Nyungwe forest is hundreds of thousands of years old, the best-preserved montane rainforest in Central Africa with a wide diversity of animal species making it a priority for conservation in Africa. The forest is situated in a region where several large-scale biogeographical zones meet and provides a great variety of microhabitats for many different species of plants and animals. There are 13 species of primates including colonies of Chimpanzees and large groups of Colobus monkeys and 310 species of birds.

From 1958-1973, Nyungwe was reduced by over 150 km² due to cutting trees for firewood, fires, hunting of animals for food and small-scale agriculture which had a devastating effect on the wildlife habitat. In 2005, the Rwandan Government made Nyungwe an official National Park, giving it the highest level of protected status, and began a reforestation programme.

Since 2014 DelAgua has distributed 10,594 stoves in Nyamasheke and Rusizi Districts, all in those Sectors closest to Nyungwe Forest. Each stove uses at least 50% less wood, so these stoves will save a total of 2.4 km2 of forestry across their 7- year life.

An education programme for each family is a critical part of our stove distribution and we employ a fantastic team of 4,000 local community health workers to visit and support each of our recipient families. This allows the communication of key messages around the importance of using less wood and the negative impact of deforestation on their lives as well as understanding the significant health and economic benefits of using the stove.

Today the population is aware of the benefits of the conservation of Nyungwe Forest and they understand why cutting wood and hunting in the park is prohibited. All of this increased awareness would be immaterial without a more efficient stove: finding sufficient fuel for a traditional 3-stone fire without encroaching on the Nyungwe Forest would be an insurmountable daily challenge for the women and children who bear the brunt of fuelwood collection.

DelAgua District Manager, Bruno Nyirimana, who regularly visits and surveys local households in the region, reports that local people stress the importance of fuel efficient DelAgua stoves distributed in the two districts in tackling this problem and the Bweyeye Sector local leader commented that the DelAgua stove ‘had a big impact in conserving the biodiversity and wellbeing of the people in Bweyeye and the mass distribution of stoves was a good sign and strong example to demonstrate that the Government of Rwanda, with partners like DelAgua, are focused on education to change traditional behaviours and increase knowledge in environmental protection with tangible results.’

A Nature-based Solution requires not just a single action, such as tree planting or the creation of conservation areas, but many, and the DelAgua stoves have played an integral part in the success of the Nyungwe Forest conservation and reforestation programme by reducing wood consumption and breaking the cycle of destructive harvesting of trees for fuel while also addressing the major societal challenges of climate change, health and socio-economic development.

Thanks to the expertise and efforts of our local DelAgua Rwanda team who, despite Covid, continued to safely distribute more than 300,000 stoves in the most challenging circumstances, the Tubeho Neza programme is on track to provide a total of 2.3 million stoves. 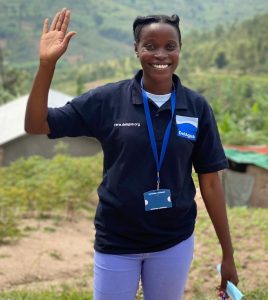 The last word goes to Louise Mukabegazi a District Manager who has worked for DelAgua for 5 years. She explains what motivates her and her team to achieve so much: “My work has filled a large part of my life. The only way to be truly satisfied is to do what you believe is great work. And the only way to do great work is to love what you do. The whole team works together to make the project a success. We all support each other and work together to offer creative feedback and turn our ideas into reality”.